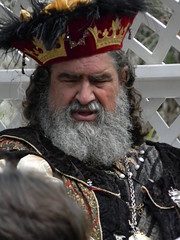 Question by Maria: Is using an operatic piece for a chorus audition a bad idea?
Hello there 🙂 I have a audition for a very prestigious choir group at my school in about 2 months. I want to do O del mio dolce ardor, the aria. I’m skeptical to do this though. I have no operatic training. I understand the concept that they’re very emotional, use darker and all vowels and a lot of verbrato and I think I can do that… I just don’t want to screw it p. Should I do something else?
The group specializes in Renaissance music and madrigal music for the record.

Answer by Birdgirl
It’s not so much that you are going to sing an operatic aria that might be a bad idea. It’s just a bad idea if you walk in and try to sing it as you THINK an opera singer would sing it. From your description, if you walked into an audition and sang an aria that way (darker and all vowels and a lot of “vibrato”) you would look and sound like an idiot.

Besides if they specialize in Renaissance music and madrigals, they may want a relatively light voice with very little vibrato at all. If you have a natural vibrato, don’t try to force yourself to sing completely “straight” because you’ll end up going off pitch and eventually causing strain to your vocal cords. Make sure you have your breathing and support solid so that your vibrato is completely controlled. Some choir directors want a kind of boy soprano/Gregorian monk sound even among their females, but really if you don’t have that kind of sound naturally, it’s best to find another choir where you might blend in better.

And that’s another thing. In choral music–it’s important that your voice blends with others. You can have a gorgeous voice–but if it sticks out of the group and you aren’t the soloist, you won’t be picked. Don’t be surprised if during your audition the choral director has you sing with a few other people (but on a different part) just to check the blend.

Madrigals and other music of the period is often acapella. That means the ability to stay on pitch throughout the song is critical. You should find out if the director wants you to pick a song that you can do acapella when you try out. It’s possible to sing an aria without accompaniment, but why make it harder on yourself?

Operatic training isn’t necessary to sing madrigals. The ability to sing on pitch and to sing a part standing among other singers who are all doing different parts–that’s critical. If you can read music it will be even more helpful (and you may be tested on this depending on whether this is high school or college we’re talking about).

Another factor is how many other singers with the same voice type as you will be auditioning for the group and how many openings they have for that section. If you are one of 50 sopranos trying out for 2 openings–not so good. However, if you can’t sing at all, they aren’t automatically giving you a place in the choir by default. They’ll keep looking.

Please understand that I am not trying to make fun of you or be harsh. I think you would be better off singing some traditional song like “Scarborough Fair” or “Greensleeves”. Sheet music comes in different keys and you pick the key that best suits your voice. However, I do have a feeling this is going to be an acapella
audition, and either of those songs (or something similar) would work very well.
Make sure you practice the song you choose over and over again so you know automatically what note to start on. You don’t want to switch keys in the middle of your song. Record your practice sessions and listen carefully for any “sour notes”. Don’t try to blame your microphone. Most people don’t like to hear their recorded voices, so do listen to the recording a few times just to get over the “shock” so you can listen objectively.

If you are interested in singing opera someday, or even classical music in general, it is best you take proper singing lessons. You can even ask the choir director who is bound to know the right teachers to recommend (and many teachers also teach private voice).

That’s a very pretty aria by the way. If you have the music–save it. Put it in your “someday” pile.

What do you think? Answer below!

Q&A: How do I make/Where can I buy a relatively cheap Kimono?

Q&A: How do I make/Where can I buy a relatively cheap Kimono?

by elaynab Question by Chris: How do I make/Where can I buy a relatively cheap Kimono? I've got to dress up...

Question by FBMagnolia: I'm writing a compare & contrast essay on Fairfax, VA and Fairburn, GA. Any ideas? It's for my...

Audition songs for a Mezzo-Soprano?

Audition songs for a Mezzo-Soprano?

Question by Mae: Audition songs for a Mezzo-Soprano? I'm 15 years old and I am auditioning for a large show in...

Am I just a sixteen-calendar year previous brat (quite extended/rant considerably)?

Am I just a sixteen-calendar year previous brat (quite extended/rant considerably)?

by elaynab Concern by 卍 Heil Buddha 卍: Am I just a 16-year outdated brat (pretty long/rant considerably)? My mother and...

This site uses Akismet to reduce spam. Learn how your comment data is processed.